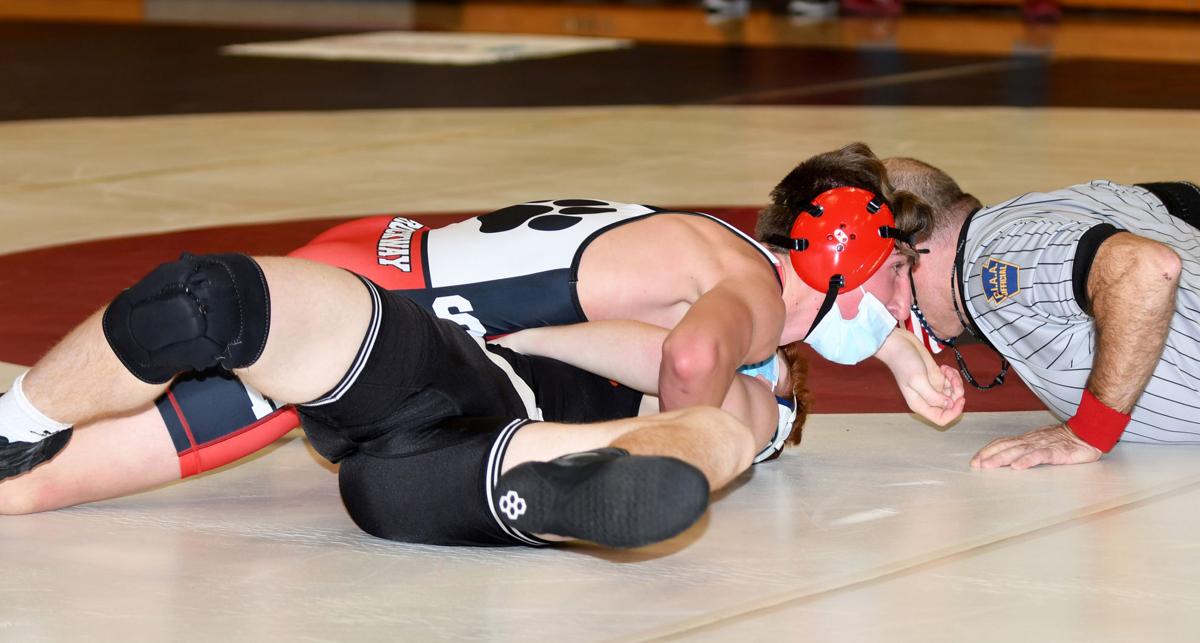 Brockway freshman Dylan Bash, top, pins Sheffield’s Trenton Mead in the third period of their 138-pound bout Tuesday night to capture his first varsity win. Bash’s fall was one of four for the Rovers in a 36-33 victory. Brockway freshman Jack Smith fights to put Sheffield’s Gideon Dickinson on his back during the first period of their 160-pound bout Tuesday night. Smith pinned Dickinson in 31 seconds for his first varsity win. 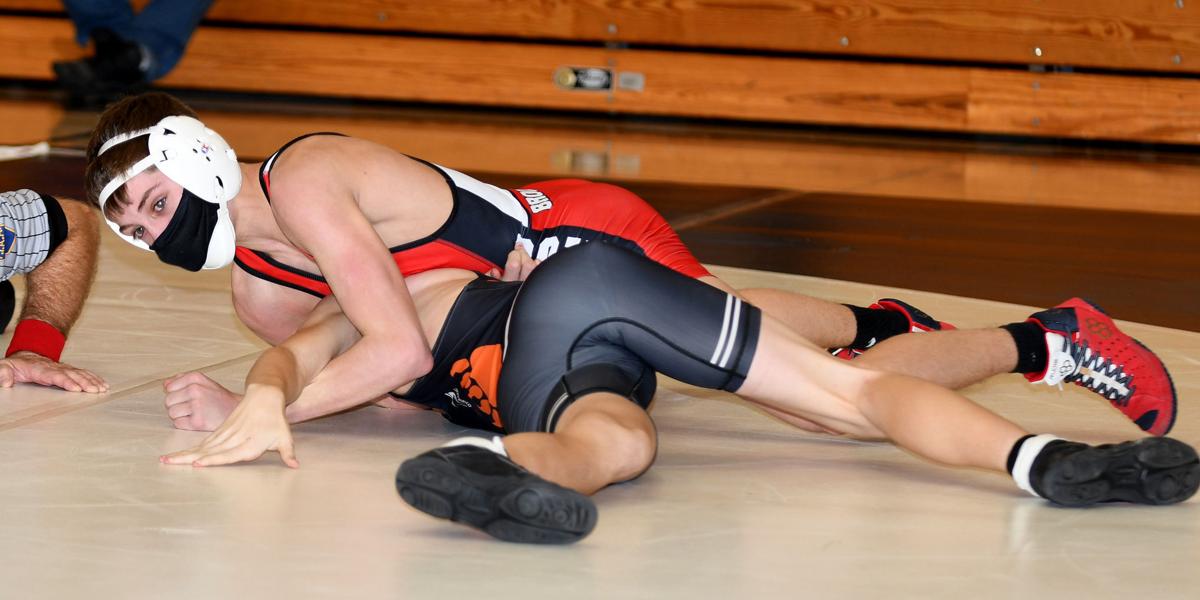 Brockway freshman Dylan Bash, top, pins Sheffield’s Trenton Mead in the third period of their 138-pound bout Tuesday night to capture his first varsity win. Bash’s fall was one of four for the Rovers in a 36-33 victory.

Brockway freshman Jack Smith fights to put Sheffield’s Gideon Dickinson on his back during the first period of their 160-pound bout Tuesday night. Smith pinned Dickinson in 31 seconds for his first varsity win.

BROCKWAY — The Brockway wrestling team won four of the six contested bouts, all by way off fall, Tuesday night against Sheffield to help offset the forfeits it was forced to give up to come away with a season-opening 36-33 victory against the Wolverines.

The teams split the match with six wins each, with there being no match at 145, and it was the host Rovers who won the bonus point battle (18-15) to pull out the win.

Brockway, which gave up four forfeits to Sheffield’s two, got pins from all three of its freshmen — Dylan Bash, Jack Smith and Weston Pisarchick — in their varsity debuts, as well as from junior Garret Park. Pisarchick’s fall in the penultimate bout sealed the Rovers’ victory with Mark Palmer and Noah Bash having already received forfeits.

“We’re just thrilled and grateful to be wrestling right now,” said Brockway coach Eric Grecco. “I told the kids to take every moment and every match and make the most of the it you can, because you don’t know in this day and age right now.

“The kids had a lot of fun out there and got the bonus points where they needed to. All three of our freshmen went out in their varsity debuts and looked good and got pins, and I was super proud of them.”

Palmer received a forfeit at 126 to get things started, with Park and Dylan Bash following with falls to quickly give Brockway an 18-0 lead.

Park needed just 23 seconds to deck Wolverine Andrew Morgan, while Bash wrestled into the third period in his varsity debut. He opened the scoring against Trenton Mead with a takedown near the midway point of the first period and was in control from there.

Bash rode out Mead from there, then did the same in the second period — turning the Wolverine late in the period for three nearfall points and a 5-0 lead. Bash chose bottom in the third and wasted little time reversing Mead to his back before getting the pin 29 seconds in the period.

After no match at 145, Sheffield got on the board at 152 when Cooper Traister received a forfeit. Brockway quicky answered with back-to-back bonus-point wins to push its overall lead to 30-6.

Smith notched the first of those wins when he pinned Gideon Dickinson in 31 seconds at 160, while Noah Bash received a forfeit at 172.

Sheffield (1-3) then roared its way back into the match with four straight wins to get within three points (30-27) and give itselfa chance at the overall victory.

Landon Mead jump-started that run with a 9-5 win against Rover senior Weston Smith, who bumped up a weight to compete at 189.

After a scoreless first period, Smith actually opened the scoring when he turned Mead from the top position in the second to earn three nearfall points. Mead quickly fought off his back and revered the Rover, scoring a set of backpoints late in the period to grab a 5-3 advantage.

Mead then turned Smith for two more nearfall points in the third before the Rover notched a reversal to make it 7-5. However, Smith was unable to turn the Wolverine to tie the bout before giving up a late penalty point and escape to set the final.

Brockway then bumped sophomore Seth Stewart up to 215 to take on Sheffield’s returning state medalist Ethan Finch, who placed sixth in Hershey last year. Finch, who built a 7-1 lead after one period, eventually pinned Stewart in 3:00.

Wolverines Danah Campbell (285) and Chase Kyler (106) then received forfeits to make it a three-point match, but Pisarchick ended any hopes of a Wolverine comeback when he bumped up to 113 and decked Collin Brown in 1:29. Pisarchick recorded a pair of takedowns before getting the fall.

Sheffield’s AJ Barnes closed out the night with a forfeit win at 120.

“We bumped Seth Stewart up to wrestle Finch, a really tough state placewinner, because we wanted to see where we were at and get that competition,” said Grecco. “We moved some other kids around too to try get the best matchups we could, and overall, I felt we did pretty well out there tonight.”

Brockway (1-0) is back in action Thursday at home against Clearfield.

ESTATE NOTICE Letters Testamentary in the estate of Joseph C.