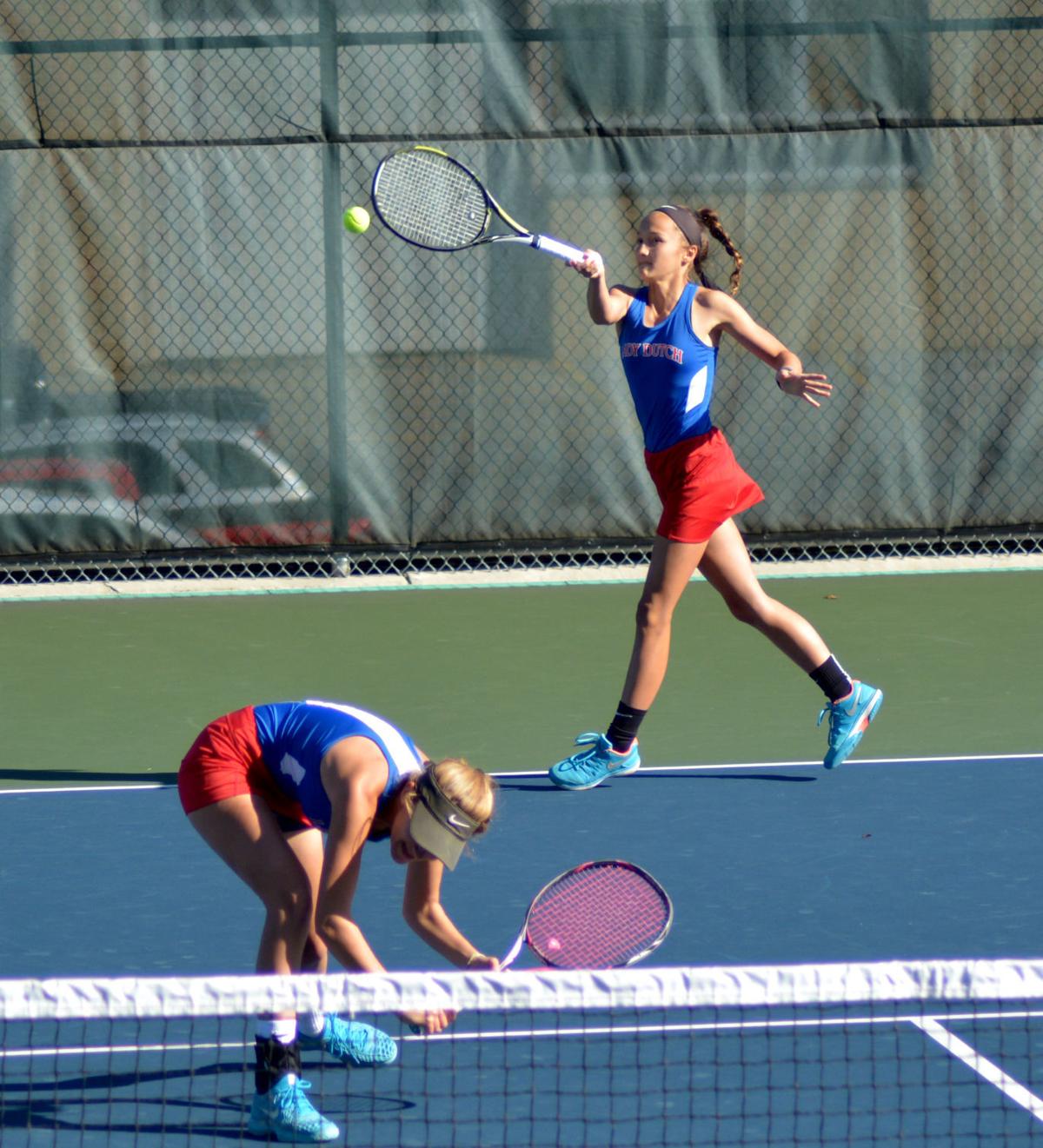 St. Marys’ Davan Lion, back, hits a return along the back line as doubles partner Lilia Lion ducks out of the way during the District 9 championship match against Punxsutawney’s Allie Doverspike and Abby Gigliotti. The Lion sisters won 6-1, 6-2 to claim their second straight doubles title. 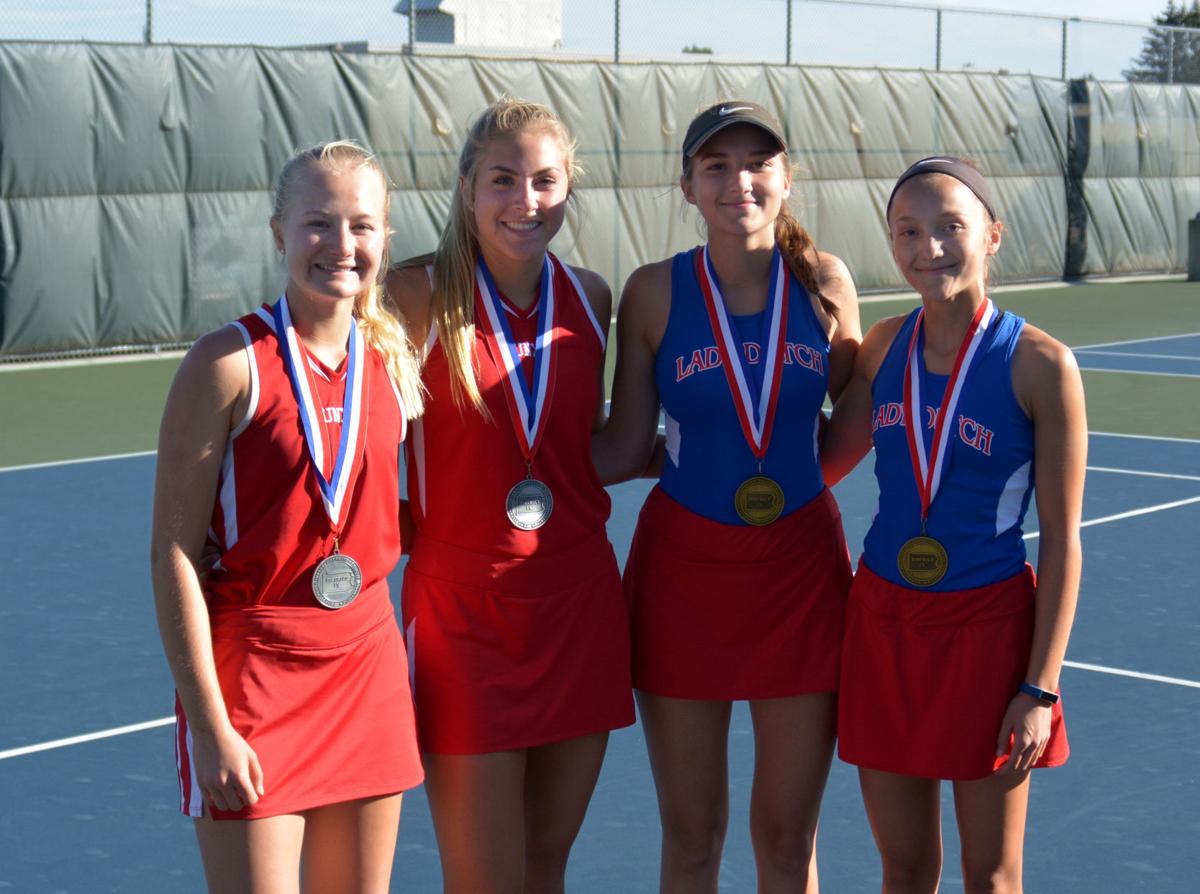 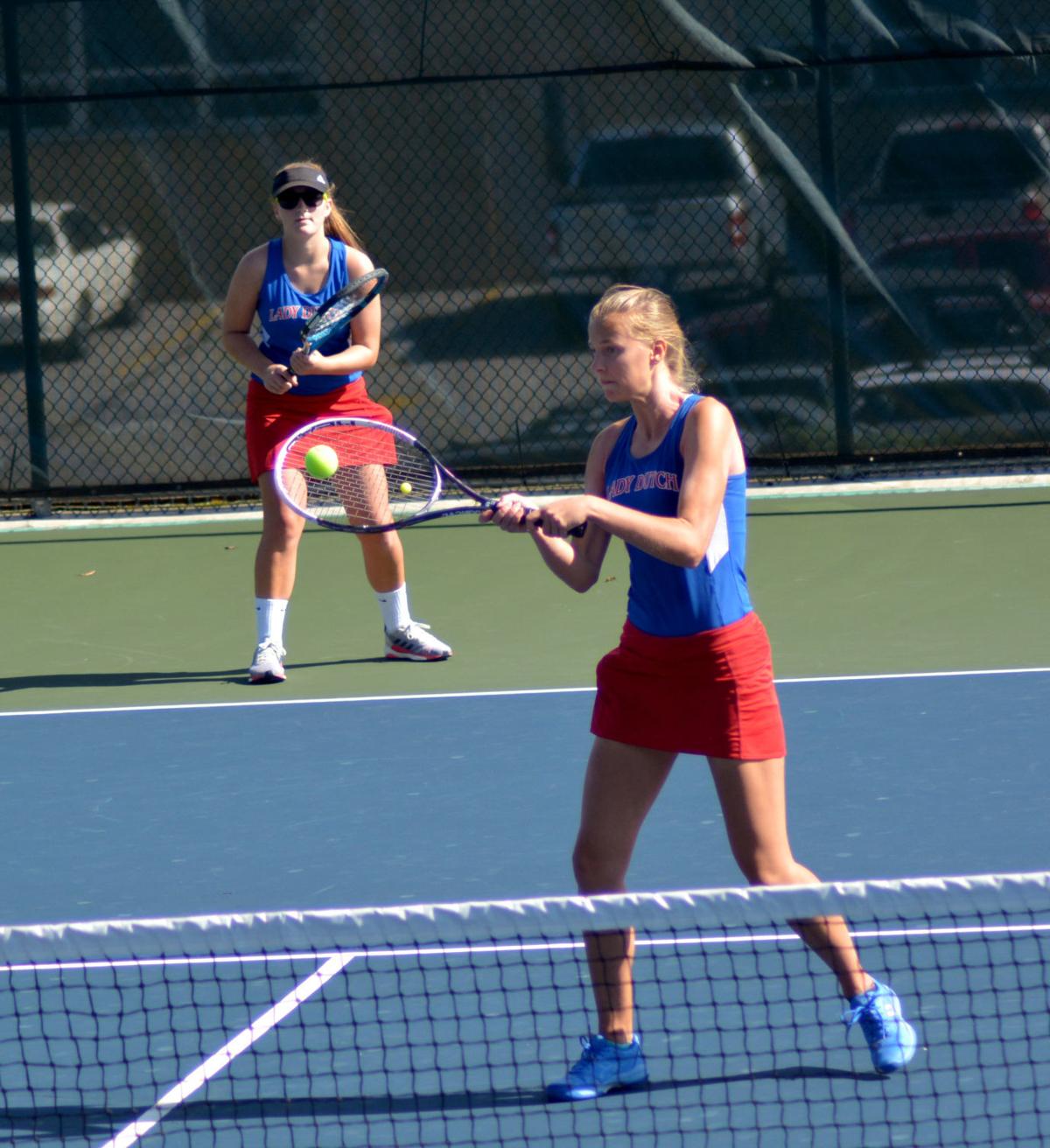 St. Marys’ Brooke Henry, front, hits a return at the net as doubles partner Lydia Ehrensberger, back, looks on during their semifinal match against Punxsutawney’s Allie Doverspike and Abby Gigliotti during the District 9 doubles tournament Tuesday. The Lady Chuck duo won 6-1, 6-0 to advance to the final. 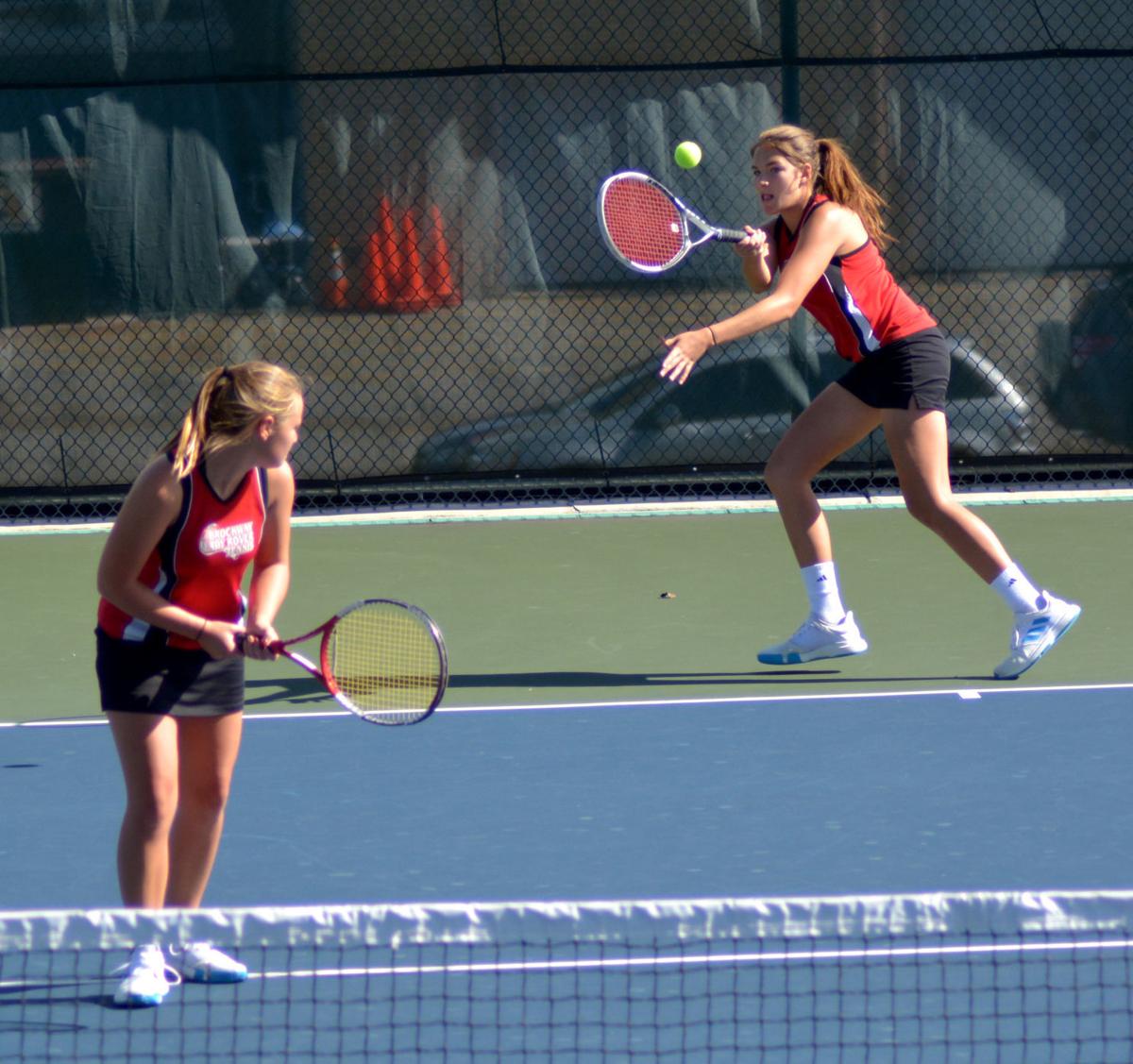 Brockway’s Selena Buttery, right, returns a shot as doubles partner Morgan Pirow, left, looks on during a match against St. Marys’ Davan Lion and Lilia Lion in the semifinals of the District 9 doubles tournament Tuesday. The Lion sisters won 6-1, 6-1 on their way to claiming the title.

St. Marys’ Davan Lion, back, hits a return along the back line as doubles partner Lilia Lion ducks out of the way during the District 9 championship match against Punxsutawney’s Allie Doverspike and Abby Gigliotti. The Lion sisters won 6-1, 6-2 to claim their second straight doubles title.

St. Marys’ Brooke Henry, front, hits a return at the net as doubles partner Lydia Ehrensberger, back, looks on during their semifinal match against Punxsutawney’s Allie Doverspike and Abby Gigliotti during the District 9 doubles tournament Tuesday. The Lady Chuck duo won 6-1, 6-0 to advance to the final.

Brockway’s Selena Buttery, right, returns a shot as doubles partner Morgan Pirow, left, looks on during a match against St. Marys’ Davan Lion and Lilia Lion in the semifinals of the District 9 doubles tournament Tuesday. The Lion sisters won 6-1, 6-1 on their way to claiming the title.

DuBOIS — The St. Marys girls tennis team continued its postseason dominance as the sister duo of Lilia Lion and Davan Lion claimed the District 9 doubles title with a 6-1, 6-2 victory over Punxsutawney’s Abby Gigliotti and Allie Doverspike Tuesday afternoon at DuBois.

The Lady Dutch have now won each of the last five D-9 titles, winning singles, doubles and the team tourney in 2018, while the Lion sisters — Lilia (junior) and Davan (sophomore) added to teammate Samantha Hayes’ singles title this year

While St. Marys has dominated the singles tournament in recent years, having won eight of the last nine, including three straight from Hayes, things had not been the same in doubles.

The Lions snapped a decade long drought of doubles titles for the Lady Dutch last season with their win over teammates Brooke Henry and Izzy Ehrensberger.

With the back-to-back titles, Davan and Lilia became the first even sister duo to win more than one doubles crown, as the only other doubles team made up of sisters to win a D-9 title was DuBois twins Kristina and Alisha Torretti, who won the Class AAA title in 2012.

The duo powered their way through the tournament Tuesday, losing just six points between their three matches on the way to the title.

“Going into it today I had a lot of nerves, but she (Davan) helped come me down and after every point we would cheer each other up,” Lilia said.

The duo also noted that their experience from last year’s title match allowed them to not dwell on their mistakes.

“We had to focus on one point at a time and if we messed up we just forgot it and moved on,” Davan said.

“Tennis is a mental sport, you’ve gotta get your head in the game if you’re going to succeed,” Lilia added.

After getting a bye into the second round, the Lions defeated Punxsutawney’s other doubles team of Camden Emhoff and Taegan Ludwig 10-1.

The Lady Dutch team then secured a 6-1, 6-1 victory over Brockway’s Selena Buttery and Morgan Pirow to reach the final where they topped Gigliotti and Doverspike 6-1, 6-2.

Buttery and Pirow secured a first round win by a score of 10-3 over Elk County Catholic’s Sophie Neubert and Grace Keys 10-3 before defeating Clearfield’s Kirstie VanTassel and Lindsey Kerlin 10-1 in the semis.

VanTassel and Kerlin reached the quarterfinal round with a 11-10 (7-5) victory over the Johnsonburg duo of Madison Amacher and Rachel Buhite.

Emhoff and Ludwig topped Bradford’s Lauren Baldwin and Tyler Hillayrd 10-2 in the opening round.

Gigliotti and Doverspike had the other bye at the top of the bracket as they reached the semifinals with a come from behind 10-5 victory over ECC’s Victoria Glatt and Marley Sorg.

In the semis the Lady Chucks defeated St. Marys’ Henry and Lydia Ehrensberger 6-2, 6-1 to earn a spot in the title match.

Ehrensberger and Henry topped Johnsonburg’s Chloe Trumbull and Alex Hodgdon 10-4 in the opener before securing an 11-9 victory over Clearfield’s Kylie VanTassel and Ally Gaines in the quarterfinals.

Kylie VanTassel and Gaines had defeated Brockway’s Mackenzie Hook and Taylor Rhed 10-4 in their opener, while the other first round meeting at the top of the bracket saw Glatt and Sorg win 10-1 over Bradford’s McKayla Irons and Alicia Dansberger.

In Tuesday’s championship match, both teams won on their respective services to open the match, as first it was Lilia Lion finishing off her own service with a shot over the heads of Gigliotti and Doverspike who had both come up to the net.

Gigliotti served the second game, as the teams traded game-points before eventually Doverspike finished off a point at the net to even the first set at one game apiece.

After Davan Lion was able to win a game off her serve when a shot by Gigliotti went wide, the Lady Dutch looked to break Doverspike’s serve.

The Lions were able to win all four points in the game to break Punxsy’s serve and take a 3-1 game advantage as Lilia finished off the game by hitting a powerful return on the serve out of reach of both Lady Chuck netters.

Punxsutawney looked to respond by breaking Lilia’s serve, but the junior finished off the point by sending a shot into the back corner of the court as St. Marys went on to win the next two games and take the opening set 6-1.

The Lady Dutch broke Doverspike’s serve once again to open the second set, but Punxsy responded by breaking Lilia’s serve with four straight points to even the second set at one game apiece as it was the only time the Lions had their serve broken on the afternoon.

With the hard serving Gigliotti at the line, the Lady Chucks looked to take their first advantage of the match, but with the game at 40-15 Lilia was able to get another unattainable return off a serve to give St. Marys a 2-1 game advantage.

The Lady Dutch then won the next three games to take a 5-1 advantage and put them on the brink of claiming the title, but Gigliotti battled back by winner her serve on four straight points when St. Marys sent a shot wide.

With Davan serving, the Lions finished the match off when Lilia powered a shot up the middle past Doverspike to close out the 6-1, 6-2 victory.

“Blessed is a good word for what we’ve accomplished, we put a lot of time into it and it’s exciting to see this result and I couldn’t be happier,” St. Marys head coach Dave Lion said.

“I think everybody improved throughout the year and that made it tougher for us to get the W today and hats off to everybody else in our district, the more everybody improves it makes us that much better representing and going to Hershey.”

The Lions will now compete in the PIAA Doubles Championships at Hershey Racquet Club Nov. 2-3 as they will take on the third place doubles team out of the WPIAL (District 7) in the opening round.

Tennis action continues today with the District Team tournament with a pair of semifinal matches as St. Marys will look to make it back-to-back postseason tournament sweeps.

Top seed St. Marys will take on fourth-seeded Elk County Catholic at Benzinger Park at 3 p.m., while second-seeded Punxsutawney will host No. 3 Clearfield.

The winners will battle for the District 9 title Monday.