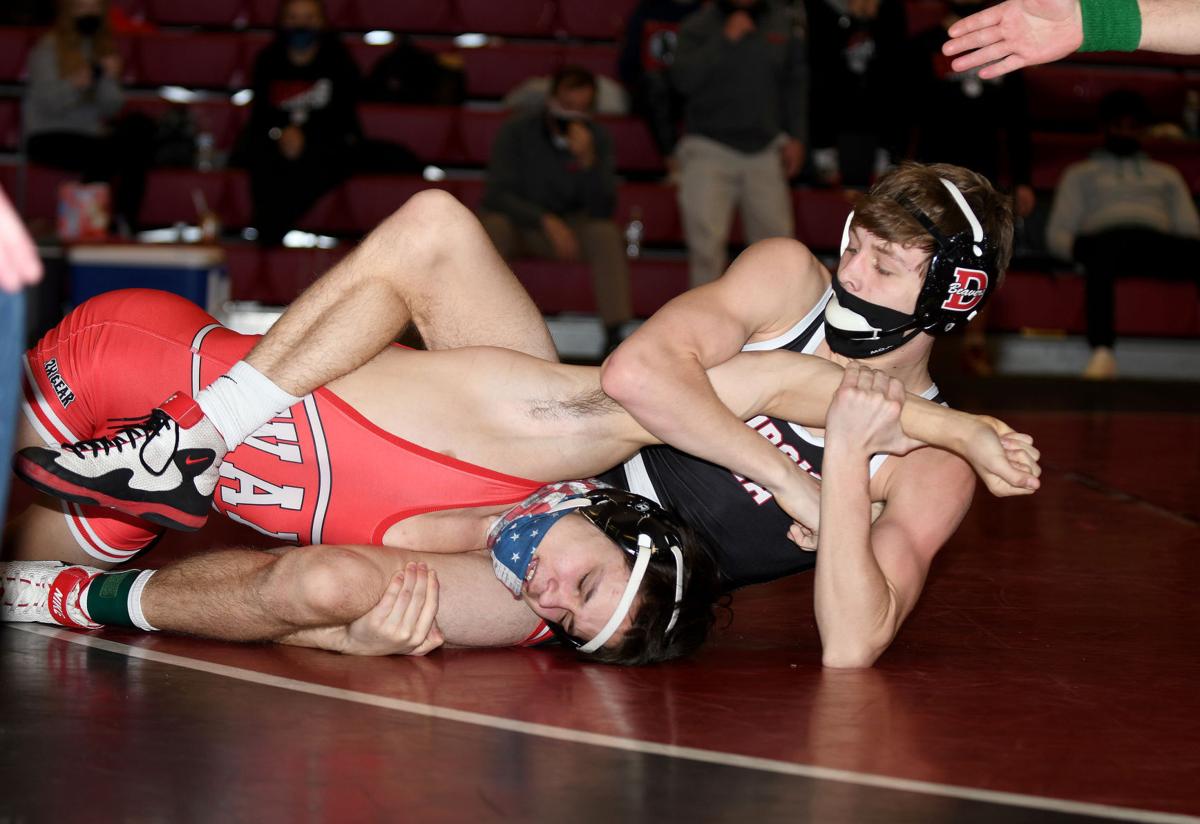 HYDE — The DuBois wrestling team put together a solid performance Saturday at the District 4/9 Class AAA Championships at Clearfield Area High School as four Beavers advanced to the Northwest Regional Tournament and six of the squad’s 11 entrants landed on the podium.

Senior Chandler Ho and freshman Davey Aughenbaugh led the charge for the Beavers by winning district titles at 138 and 120, respectively, while sophomore Brendan Orr (126) and senior Ryan Gildersleeve (160) finished second to join their teammates in Altoona this weekend for regionals.

Only the Top 2 wrestlers at each weight class advanced this year under the guidelines being used to limit postseason tournament sizes beyond districts because of COVID-19. The district got five regional qualifiers a year ago and in past years had four.

Freshman Zack Gallagher nearly joined his teammates at regionals but came up a victory short a he placed third after falling in the “true second-place match” at 215 — one of seven such bouts that needed to be held.

Junior Ryan White was DuBois’ final medalist, placing fourth at 172 after going 1-2 on the day.

“We are excited to get Chandler, Ryan, Brendan and Davey through to regionals considering all of the changes (reduced number of qualifiers going to Regionals) because of COVID,” said DuBois head coach Ed Scott. “As a team, I feel we wrestled well and had some terrific performances. Our goal is to wrestle whistle to whistle, score points and look for falls.

“Although we wanted to get more to regionals, we had many positives today and look forward to the opportunity to get these wrestlers to the super regional.”

Ho dominated the bracket at 138 in winning his second district crown, and first since his freshman year at 106. The Beaver had placed second the past two years to Williamsport’s Riley Bower, who captured his third straight title by winning at 145 Saturday.

As for the top-seeded Ho (20-3), he collected a pair of technical falls on his way to winning gold. He blanked Williamsport senior Tristan Stugart, 15-0 in just 2:34, in the semifinals. He followed that up with an 18-3 tech fall in 5:24 in the finals against second-seeded Luke Freeland, a senior from Clearfield.

“Chandler has been focused all year on the postseason and has been putting in a tremendous amount of extra work this season,” said Scott. “He cruised through the semis and into the finals. I really like how he was able to open up the match in the finals and wrestle in the positions where he is comfortable.

“Guys are going to try to slow him down and keep matches close, so it’s important to score as many points as possible.”

Aughenbaugh (15-4) was the top seed in a three-man bracket at 120 and got a bye into the finals, where he faced Williamsport freshman Devin Harris (7-6), the second seed who bested Selinsgrove’s Leo Martinez, 5-1, in the semifinals.

The pair went the distance in their championship bout, with Aughenbaugh using a strong third period to capture his first district crown with a 7-2 victory.

Aughenbaugh opened the scoring with a first-period takedown but Harris battled for a reversal in the closing seconds of the period to even things at 2-2. The Beaver regained the lead in the second with an escape 10 seconds in before the two battled on their feet the entire period.

Harris chose bottom in the third, but Aughenbaugh never let the Millionaire get out. He turned Harris twice for two nearfall points each time before finishing the match on top in a five-point victory.

“Davey Augenbaugh, despite only having one match, showed why he was favored in the finals,” said Scott. “He controlled the match from start to finish and earned his first district title as a freshman.”

Orr (10-8) found himself in one of the toughest weights of the day at 126, which was one of two weights to have two returning champions in it. Orr, the second seed, won at 113 pounds last year while top-seeded Carter Weaver (16-2), a sophomore from Williamsport, was the 120-pound champ as a freshman in 2020.

Orr’s second straight trip to regional basically came down a huge win in his first bout in the semifinals against Clearfield junior Nolan Barr (17-4), who had beaten the Beaver, 5-3, in the regular season to earn the second seed in the four-man bracket.

Saturday’s meeting was just as close and ended strangely with Barr thinking he had collected his second win of the season vs. Orr. With the score tied 3-3 late in the third period, the referee awarded Barr a takedown and Orr an escape during a flurry as he let the match play out.

DuBois’ coaches questioned the call when the buzzer sounded, and after conferring with the side official, it was deemed there was no takedown and all three points were wiped off the board in a wash that made the score 3-3 again.

The bout should have went to overtime at that point, but officials ruled the final 30 seconds would be wrestled after they reversed the call. That choice made little difference as the bout eventually went to overtime anyway, and it was Orr who came up with a takedown in the extra session to come out on top 5-3.

That victory was huge, as Orr lost to Weaver, 13-1, in the finals but earned the trip to regionals with the head-to-head win vs. Barr, who battled back to place third.

Gildersleeve (14-8) earned his first trip to regionals in his final season with the runner-up finish at 160.

Seeded second, Gildersleeve reached the finals with a hard-fought 7-5 win against third-seeded Drew Balestrini (9-2) of Shikellamy. The Beaver trailed 4-2 eary in the second period but used a takedown in each of the final two periods along with a third-period escape to pull out the win.

Gildersleeve lost 15-5 in the finals to top-seeded Coy Bastian (27-3) of Selinsgrove, but like Orr, qualified for regionals as the runner-up when Balestrini finished third.

“We’re super excited to get Ryan Gildersleeve through to regionals, as he didn’t have an opportunity to wrestle the postseason last year due to injury and earned his first trip to regionals as a senior,” said Scott. “Sleeve, as we call him, puts in the hard work along with Ryan White everyday. Sleeve always gives 100% effort all of the time. He worked hard in his matches and it paid off with a trip to Regionals next week.

“Brendan Orr showed up to wrestle and had a rematch with Nolan Barr and avenged a loss from earlier in e season. He has wrestled some top talent this year and has been challenged, so it was nice to see him wrestle whistle to whistle and earn that win. His finals match, even though it was lopsided score-wise, he wrestled the entire match and pushed Carter Weaver at times.”

The freshman was blitzed in his opening bout as St. Marys senior Jeremy Garthwaite tech fall him 16-0 in 3:59. However, the Beaver quickly regrouped and won a pair of consolation bouts to land in a true-second place bout.

The Beaver followed that up with a strong 9-5 win against Garthwaite to avenge his loss to the Dutchmen earlier in the day. With a chance to reach regionals, Gallagher dropped a 5-2 contest to Aument in the true second-place match. Aument had lost 8-0 in the finals to Clearfield’s Mark McGonigal.

Free Barn Cats available for adoption. All cats are spayed

The Clearfield Area School District is seeking applicants for a