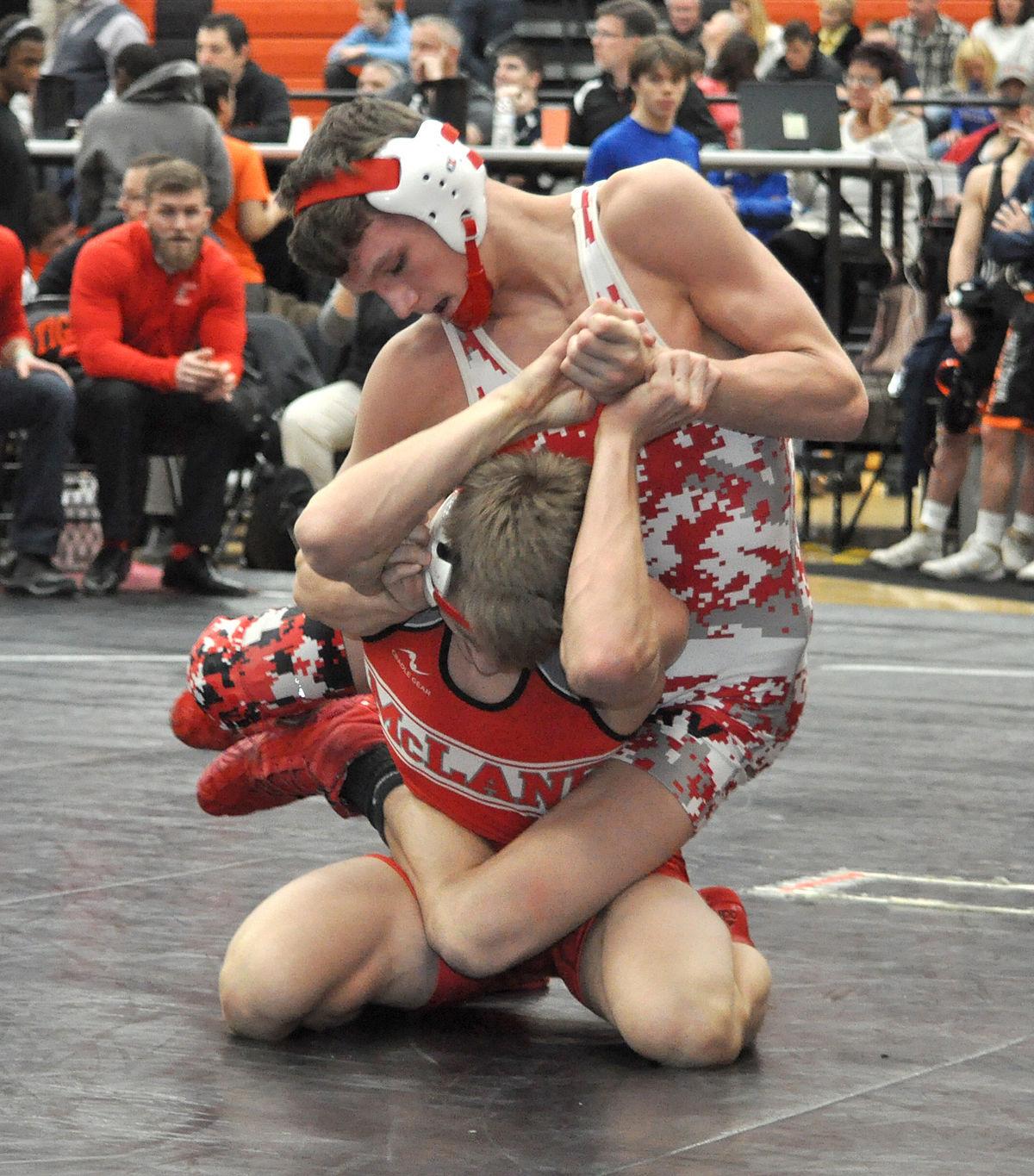 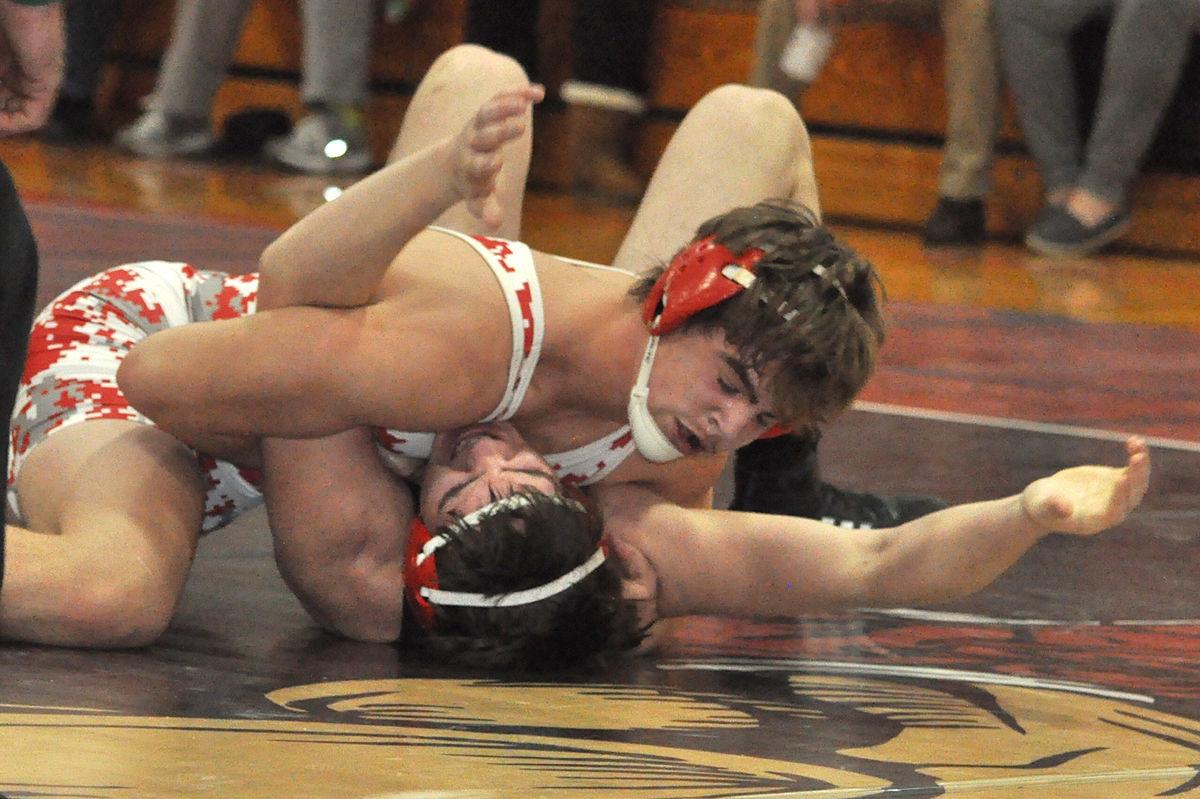 Redbank Valley’s Hudson Martz puts on the finishing touches of his third-period pin of Eric Johnson in their 182-pound bout last year. Martz was a regional qualifier, finishing 25-12.

Redbank Valley’s Hudson Martz puts on the finishing touches of his third-period pin of Eric Johnson in their 182-pound bout last year. Martz was a regional qualifier, finishing 25-12.

NEW BETHLEHEM — It’ll be Mike Kundick’s 20th season as Redbank Valley’s head wrestling coach. Not one to gloss over shortcomings, he’s also not adverse of any deserved praise.

He really likes where his team is right now, coming out of a preseason that ends this weekend when the Bulldogs open the schedule once again at the Hickory Invitational.

With a 28-man roster and 10 wrestlers back from the postseason starting lineup and a 17-3 dual meet season, the Bulldogs are anchored by a mostly underclassman roster along with a returning state qualifier and Clarion University signee in senior Ethan Wiant.

“This group of kids for some reason, wants to excel,” said Kundick, who owns a 179-96 dual meet coaching record. “They’re not thinking about themselves all the time, they help each other, they drill hard, they practice real hard. It’s the best week and a half (preseason) practice I’ve had in 15 years. The kids are upbeat, they’re excited. They’re trying to get into wrestling condition and that’s hard to do at the beginning of the year, but they’re working really hard. We’re excited to get started.”

Wiant, carrying a 73-22 record into the year, recently signed with Clarion and gives the Bulldogs a big anchor in the middle somewhere, probably 145 by the postseason. He won the D9 title at 132 last year while finishing fourth and claiming a state berth at regionals. He was 0-2 at states and finished 33-10.

“He has a chance to get 100 wins,” Kundick said. “Ethan’s freshman year he had a fantastic year and had a disappointing district tournament. And then his sophomore year got hurt and then he comes back his junior year and he has a great year. He’s a senior now, already signed with Clarion University and he wants to do something.”

“Trenten wrestled good, had a good football season and when football has a good season, it joins right with wrestling. They really complement each other and so it should be a good year,” Kundick said.

Cook finished 22-12 his freshman year at 106 pounds, getting to regionals after finishing fourth at districts. He’ll bump up to 113 this year.

“Ridge’s weight class last year got tougher, especially at the end of the year with kids who dropped,” Kundick said. “(Ridge) worked hard to summer lifted hard worked hard, it’s going to be a good go to be a good year for him.”

Martz was 25-12 at 182 after finishing fourth at districts and making some noise at regionals with a 2-2 record. He’ll be back there again, helping the team’s strong finish to the lineup through the upper weights.

And the Bulldogs have a ton of bodies for the last three weights.

“It’s crazy. In years past when dad and I were coaching together in the 80s and 90s, we had trouble finding heavyweights. Now, we’re overloaded with them, which is good,” Kundick said.

He has eight to 10 options for 195, 220 and heavyweight. Gardner went into the postseason at 27-2, but seeded fourth in a tough weight class at districts, he didn’t get out to regionals and finished 28-4. It’ll be him or Shreckengost at 195 or 220 most likely with Bonanno (13-8) returning to heavyweight.

Freshman Carsen Rupp, and sophomores Cole McHenry and Dustin Yarger are other options at 195 while Rupp or sophomore Ethan Young provide depth at 220. Sophomore Kade Minnick, and freshmen Gabe Carroll and Jacob Latuhihin are other heavyweights on the roster.

Elsewhere, the Bulldogs will start the lineup at 106 with freshman Cole Bish. He’ll be backed up by sophomore Derrick Downs, giving the Bulldogs flexibility of moving bodies up the ladder and with many teams unable to fill the lower weights, that could be a valuable asset.

Sophomore Brenden “Boo” Shreckengost looks to be the starter at 120 with senior Alex Carlson another option at that weight. Sophomore Jacob Kundick is a backup at 132.

At 138, it’s sophomore Kris Shaffer, who went 19-9 last year but didn’t wrestle in the postseason. Junior Gage Snyder will likely back him up.

All of it adds up to what Kundick feels is a lineup with plenty of potential.

“This is the one of the best balanced lineups we’ve had in a long time,” Kundick said. “As far as balance goes, every weight class has gotten pretty good experience and you don’t get that sometimes.”

And if the balance and a year of improvement cashes in the way Kundick sees it working out in the early going, the Bulldogs should have a different ending to what was a solid but not quite satisfying season that ended in the semifinals at the D9 Class 2A Duals.

The Bulldogs were 16-1 going into the Duals, then lost 35-26 Port Allegany. They split their final two regular-season duals with a loss to Cranberry and win over Clarion before finishing fifth in the team standings at the individual district tournament.

“It didn’t end the way we wanted it to at all,” Kundick said. “We had a big letdown in the district duals. Besides that, we wrestle good. That’s the most matches we’ve ever won at Redbank. Other teams could have, but we’re just wrestling more matches now than we did before. It was a good solid season. We lost to Brookville by a couple points … we lost to Port Allegany where a couple guys got upset and got pinned … We weren’t healthy at the end of the year, but that’s what wrestling is. You have to stay healthy.”

Dual meets begin at approximately at 7 p.m. unless otherwise noted.