You are the owner of this article.
Edit Article Add New Article
You have permission to edit this article.
Edit
Welcome, Guest
Home
COVID-19
News
Sports
Obits
Opinion
Local Events
Announcements
Classifieds
Share This
1 of 3 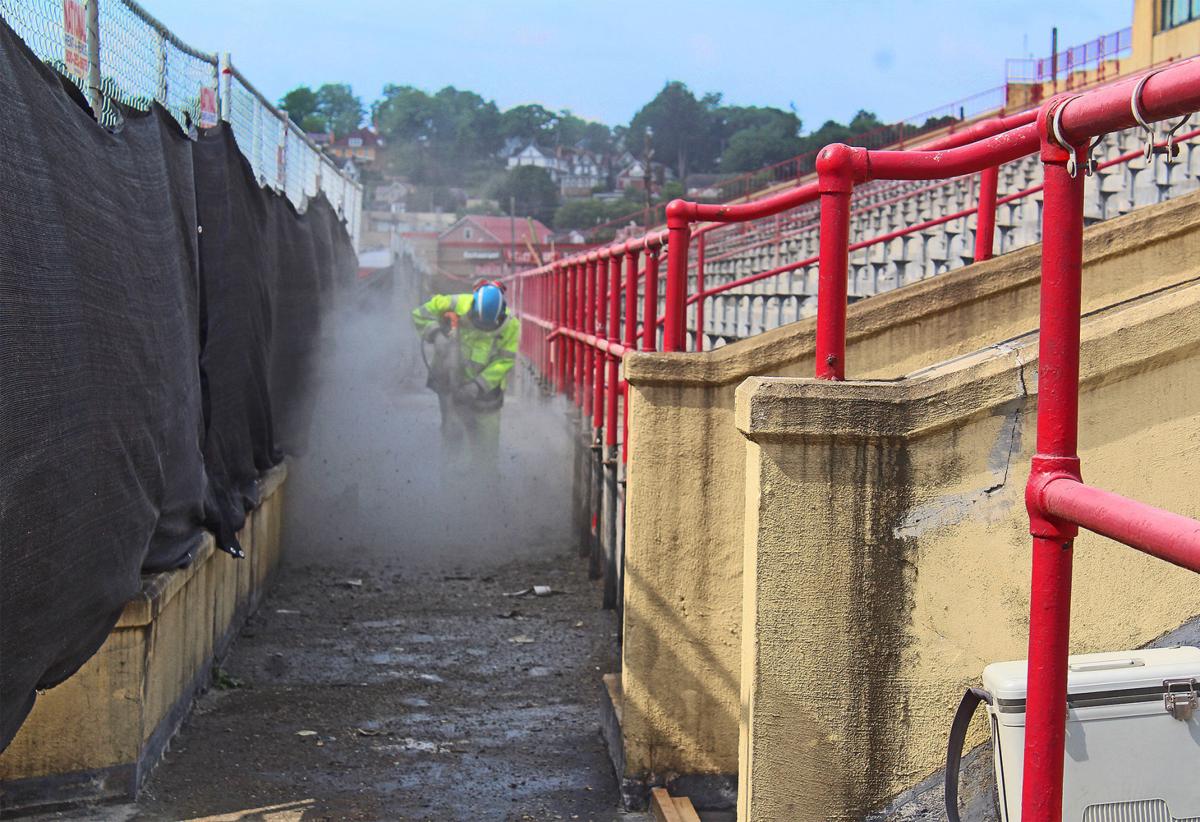 A worker from Carl Walker Construction Inc. is shown using the process of hydrodemolition to remove existing epoxy coatings from the concrete at E.J. Mansell Stadium. 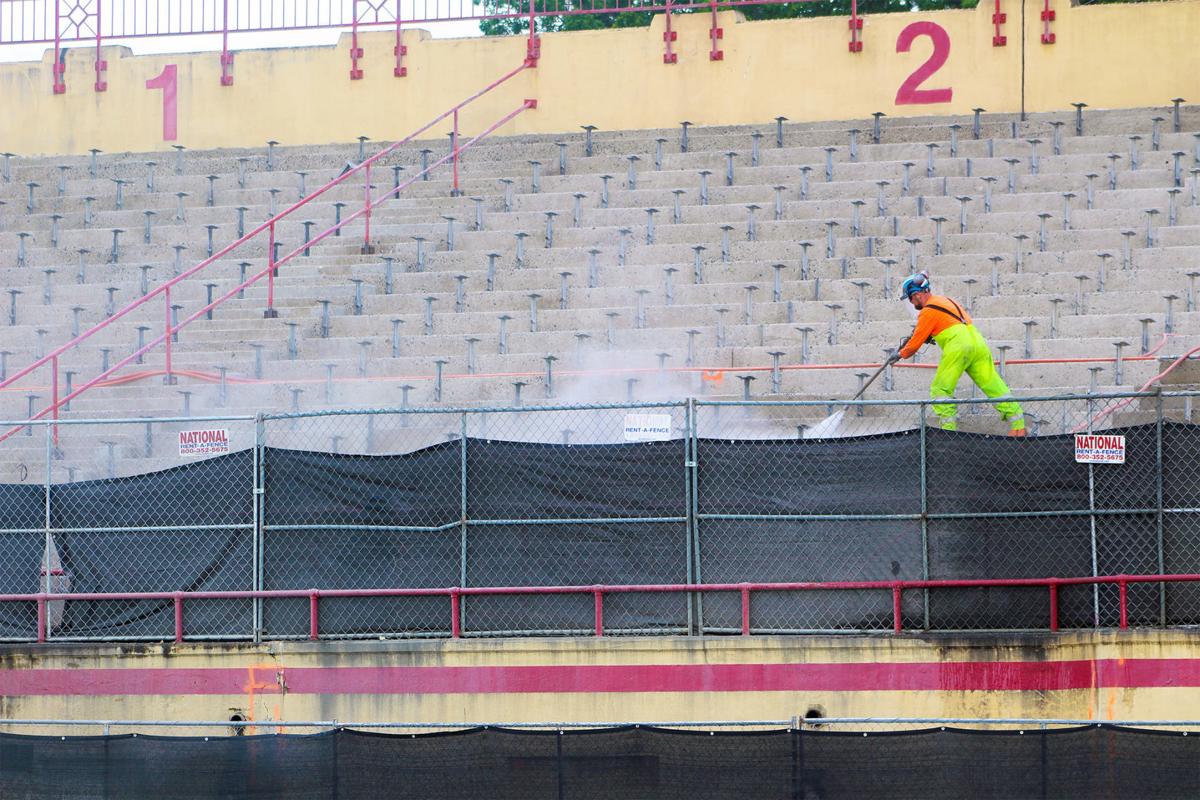 As of Thursday, the crew from Carl Walker Construction Inc. completed hydrodemolition on about half of E.J. Mansell Stadium. 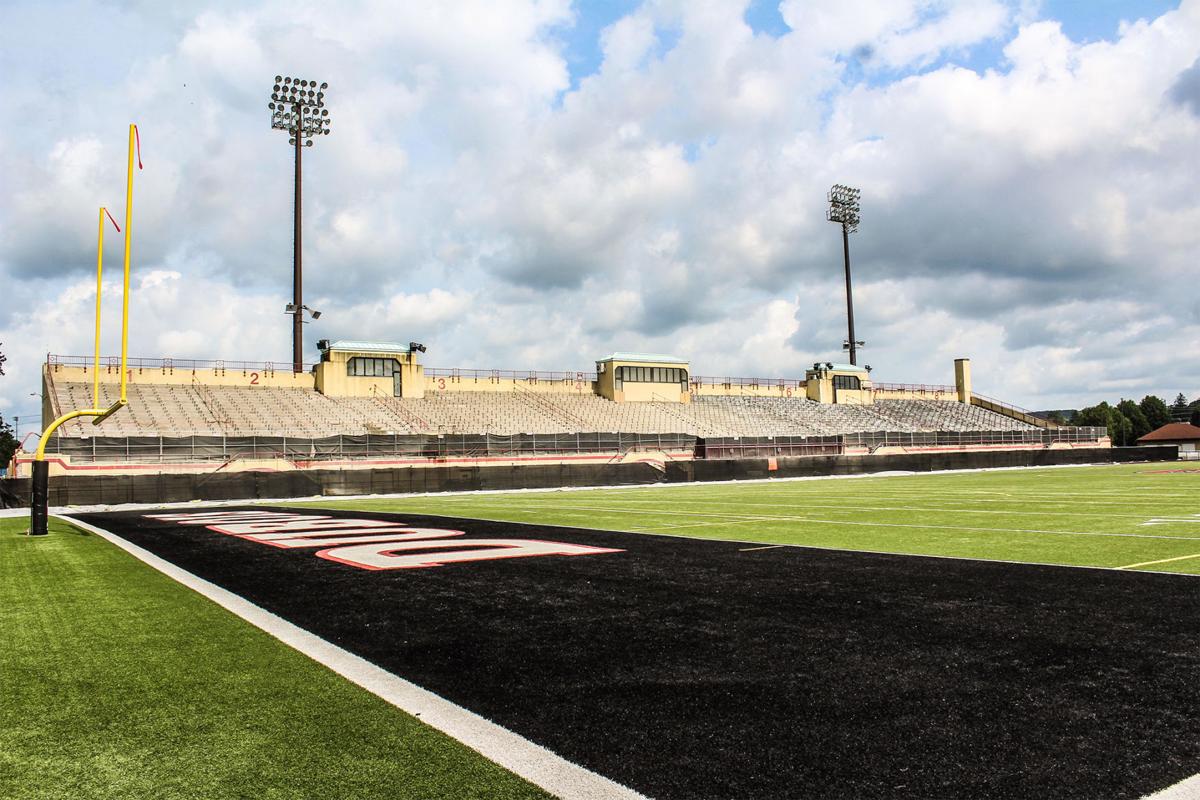 A worker from Carl Walker Construction Inc. is shown using the process of hydrodemolition to remove existing epoxy coatings from the concrete at E.J. Mansell Stadium.

As of Thursday, the crew from Carl Walker Construction Inc. completed hydrodemolition on about half of E.J. Mansell Stadium.

DuBOIS — Restoration of the exterior of E.J. Mansell Stadium is well underway and on schedule.

The DuBois Area School District’s $1.2 million renovations of the 82-year-old landmark started about two weeks ago and is expected to be near completion by the time the DuBois Beavers’ football season begins, said Joe Racz, superintendent of Carl Walker Construction Inc., the contractor for the stadium project.

“It’s a wonderful stadium. I love it,” said Racz. “Our company specializes in concrete restoration so we’re thrilled to be involved with the project and have the opportunity to bring it back to life.”

When district officials were exploring contractors to work on the project, Director Gil Barker, who serves on the board construction committee, said they felt very fortunate to find Carl Walker Construction Inc., based in Pittsburgh.

“They were instrumental in helping us understand what it is that we need to do to take care of it,” said Barker. “It’s a remarkable structure. We’re proud of it as a school district. Our goal is to restore it back to the point where we can maintain it and it can be a source of pride and a place where we continue to all get together for band competitions and football games, and what not. The whole community can enjoy it. That’s our plan.”

After the construction workers removed the seating from the stadium, Racz said the crews began the hydrodemolition process, using ultra-high pressure (40,000 psi) waterjets, which removes the existing epoxy coatings that are on the concrete.

“That (hydro-demolition) will remove all of the epoxy and then it’ll dislodge any of the loose or bad concrete and expose all of the areas to be repaired,” said Racz. “There’s some deteriorated concrete. All of the epoxy is well beyond it’s expected lifespan. So it all needs to be replaced, but to do that you need to repair the concrete first, and then you put a new epoxy coating on it.”

As of Thursday, the crew was at 50 percent completion for hydrodemolition.

Racz said he expects concrete repairs to begin as early as next week.

“We need to let the hydro crew get about halfway through the stadium so that it’s safe for the next crew to get in and start working,” said Racz.

Once concrete repairs are finished, Racz said the epoxy concrete coatings will be applied in the seating area.

“The next step will then be to get as much seating back in place prior to football season. There will be work after that, but to what extent, we will see where we end up,” said Racz. “The main focus right now is to get the seating area exposed, get the repairs done, and get the epoxy coating back on. The only unknown factor is we haven’t projected the amount of repairs to do once it’s done. We won’t know what that true extent is until the epoxy coating is removed. The outside of the stadium needs repainted as well.”

The seating capacity at the stadium is at 5,333.

E.J. Mansell Stadium was constructed from 1936-39 by the Civilian Conservation Corps, which also built the stone stairs and wall at the end of Liberty Boulevard around the same time frame. In 1994, there was a renovation of the stadium, and then in 1995 there was the addition of the press box roofs. In 2007, that was the last addition or enhancement of the stadium, and that was the artificial turf installation.

EXECUTRIX’ NOTICE In re: Estate of NORMA I. CRAWFORD, deceased