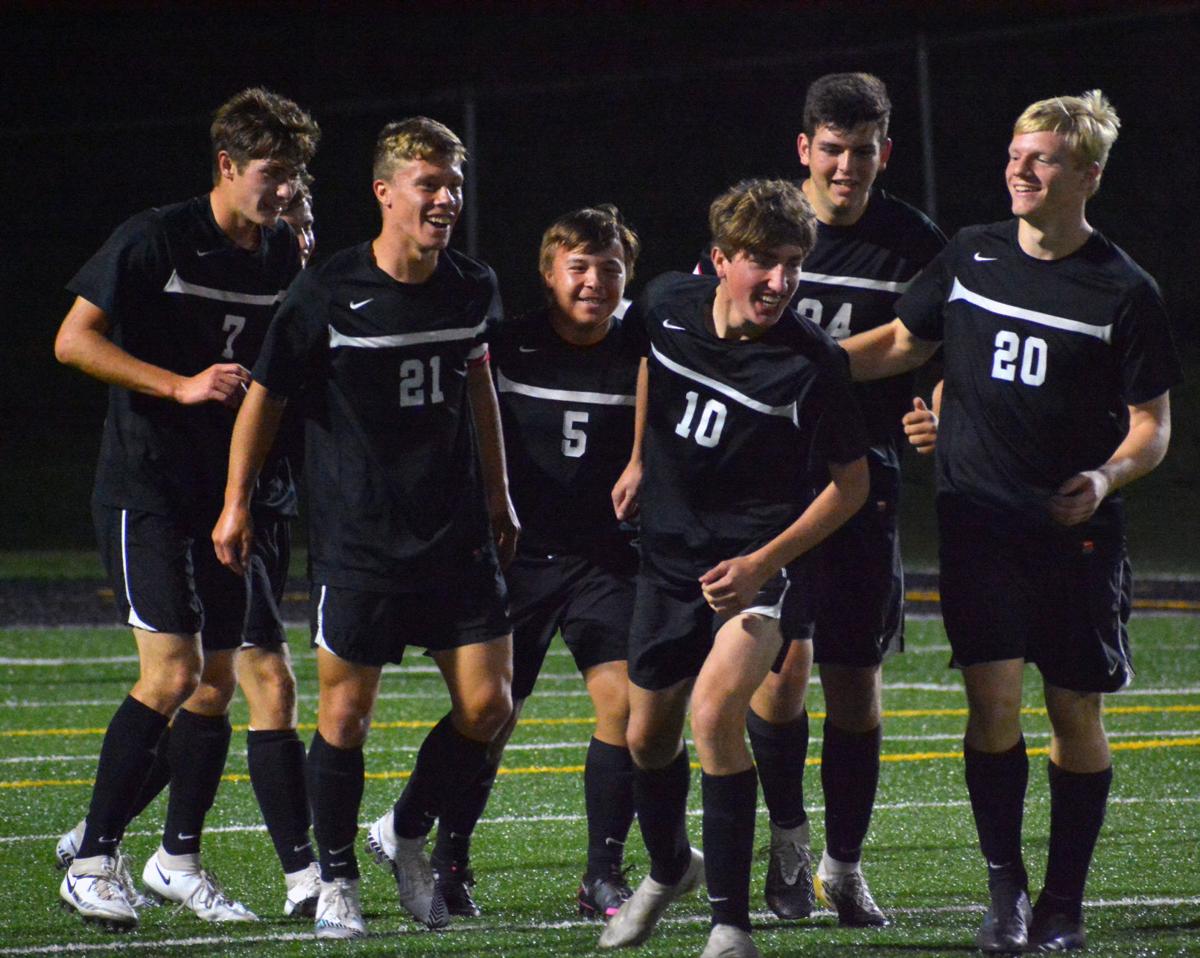 Brockway’s Dylan Bash (10) celebrates with his teammates after the first of his two goals on the evening against DuBois. The Rovers would go on to take a 6-0 win on Senior Night. 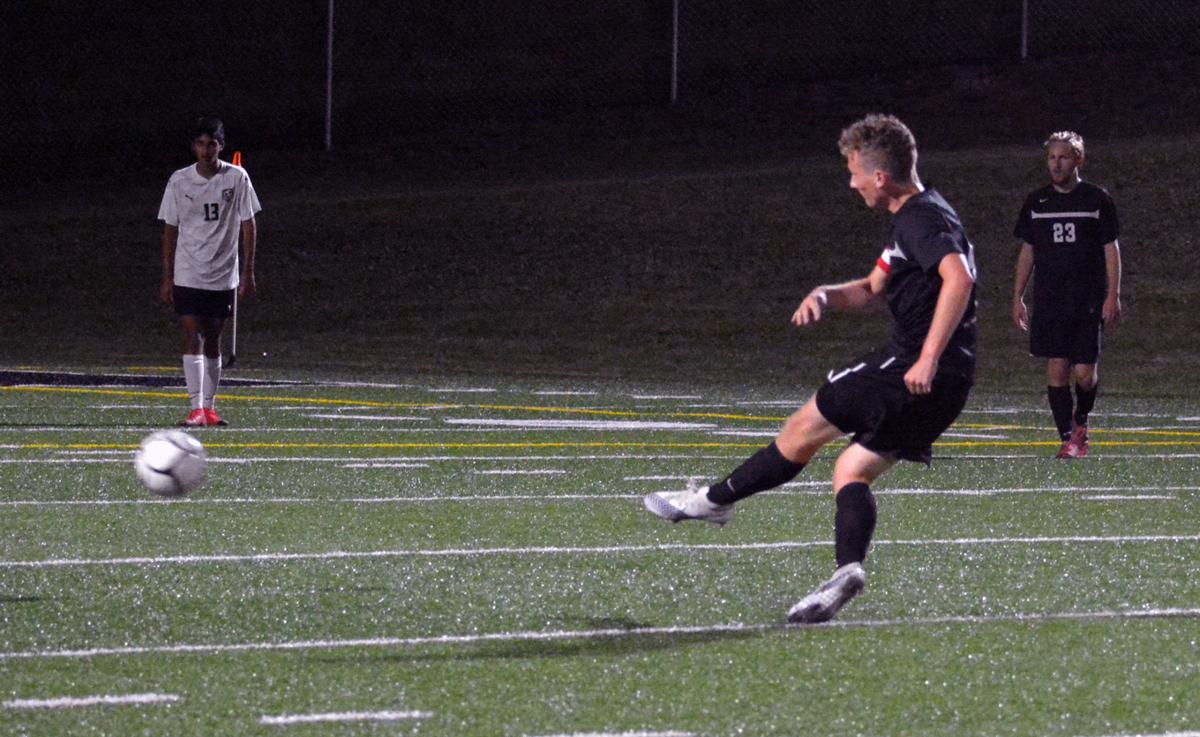 Brockway’s Eric Young boots a free kick from 35 yards out to score a goal during Tuesday night’s soccer game against DuBois. Brockway would go on to win 6-0. 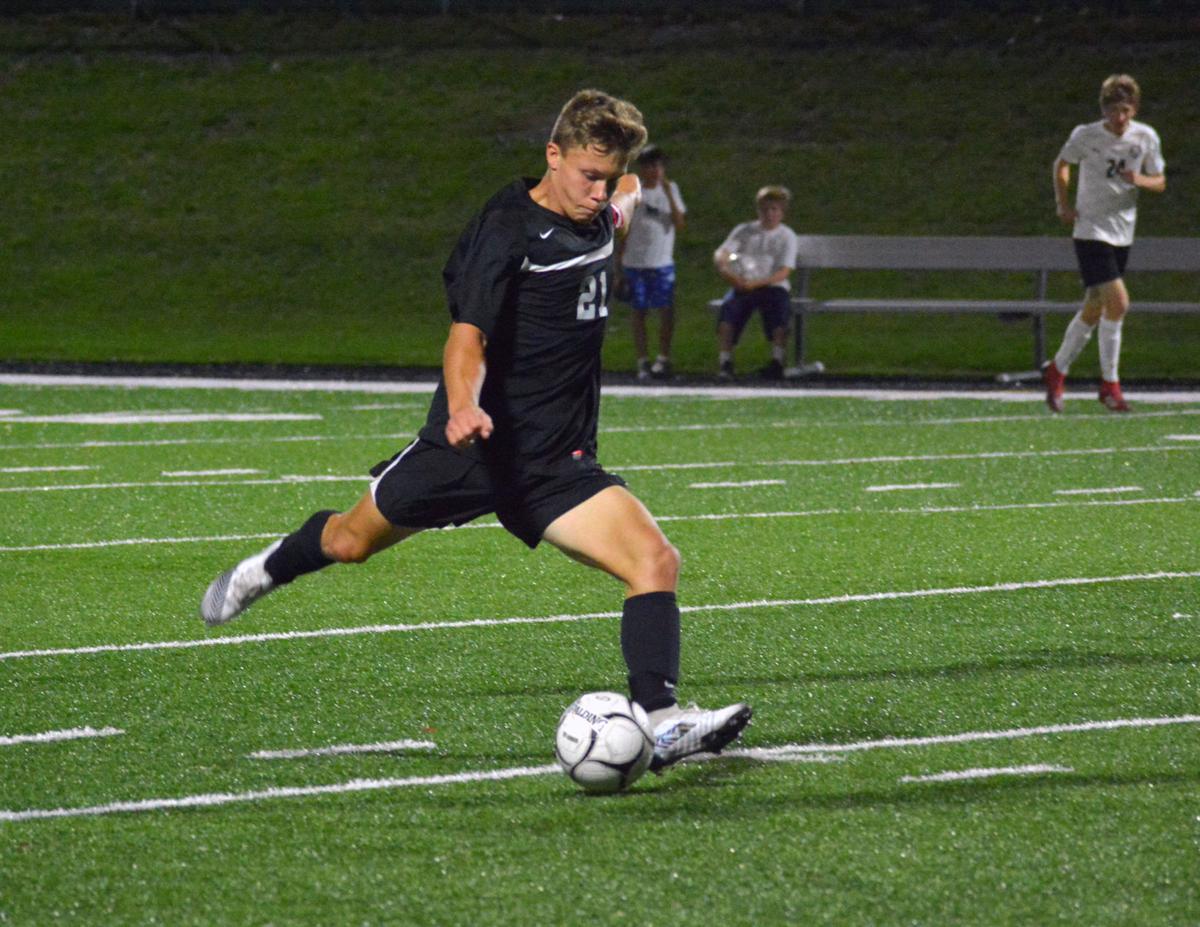 Brockway’s Marcus Bennett fires at the goal for what would be his second goal of the night during Tuesday’s game against DuBois. Bennett also added an assist as the Rovers won 6-0.

Brockway’s Dylan Bash (10) celebrates with his teammates after the first of his two goals on the evening against DuBois. The Rovers would go on to take a 6-0 win on Senior Night.

Brockway’s Eric Young boots a free kick from 35 yards out to score a goal during Tuesday night’s soccer game against DuBois. Brockway would go on to win 6-0.

Brockway’s Marcus Bennett fires at the goal for what would be his second goal of the night during Tuesday’s game against DuBois. Bennett also added an assist as the Rovers won 6-0.

BROCKWAY — It was a successful Senior Night for Brockway’s boys soccer team and its nine seniors Tuesday night, as they took a 6-0 win over DuBois at Frank Varischetti Field.

Senior Marcus Bennett had two goals and an assist while sophomore Dylan Bash also had two scored. Fellow senior Jared Marchiori had one goal and one assist while another senior, Eric Young, had another long goal on a free kick. Senior Noah Adams also added an assist, as did junior Alex Carlson.

“The seniors were pumped up on their last regular season home game here,” Brockway head coach Andy Daugherty said. “I thought they played pretty good. The first half I think we were sinking a little bit too much but they figured out what we needed to do. And our defense has played so solid all year long. (Goalkeeper) Jacob (Maze) doesn’t get too much work back there (because of the defense).”

Both squads battled back and forth before Bennett found the back of the net at the 5:34 mark as Marchiori assisted from the middle of the field and Bennett did the rest for the quick 1-0 lead.

“Whenever we need one, Marcus (Bennett) can go full bore and he’ll clang one,” Daugherty said.

DuBois had a couple scoring opportunities go awry with missed shots before Brockway made it 2-0 at the 11:30 mark. This time, Young took a free kick and booted a line drive from 35 yards out past goalkeeper Brohm Hemke.

“I don’t think the keeper even saw it,” Daugherty said of Young’s goal. “It was an absolute rocket.”

It would be just over six minutes later as the Rovers upped its lead to three as Bash got a rebound after a Rovers shot and was able to knock it over a charging Hemke at 17:26.

The Beavers were able to keep the deficit at three heading into the second half before Marchiori ended the Rovers’ scoring drought at 53:42. Bennett returned the favor to Marchiori from the first goal of the day, finding him over the middle as Marchiori’s liner skidded past Hemke to make it 4-0.

Bennett’s second goal of the night took place less than three minutes later, as Alex Carlson assisted on the goal in which Bennett fired it in from about 25 yards out for the 5-0 lead at 56:29.

Bash because the second Rover with multiple goals on the final score of the night at the 70:42 mark. That’s when Noah Adams found him and Bash booted it in for the 6-0 lead — which is what the final scored ended up.

It was the final regular season home game for Bennett, Marchiori, Young, Adams, Nolan Swanson, Dylen Coder, Dylan Antonuccio, Joe Hertel and Garret Park. Although technically injured, both teams allowed Park to start in goal to get in for a few seconds.

“I’m proud of these seniors,” Daugherty said. “They’ve worked so hard these last four years. Hopefully we have a good run in us here to finish (their careers) strong.”

Although the aforementioned nine seniors won’t be playing another regular season home game at Frank Varischetti Field, Daugherty said there’s plenty of talent among the underclassmen and they also contributed to Tuesday night’s win.

Brockway continues its undefeated run and travels to Port Allegany on Thursday.

“They’ve got a guy that scores a lot of goals,” Daugherty said of Port Allegany. “So we’re going to focus on that.”

Even in defeat, DuBois head coach Matt Erickson said there were positives from the Beavers.

“Our defense played pretty strong throughout the game,” DuBois head coach Matt Erickson said. “We had some missed touches and some miscommunication. Offensively, we started out both halves working the ball really well through the middle and playing some quick 1-2s and using our outside. As far as moving the ball goes, we’ve improved a ton. I think Brayten Sedor played really well tonight. Both our center defenders, between Houston Hemke and Thad Slima, played really well.”

DuBois gets most of the week off and is back in action Saturday morning as they host Indiana.

“We’ve just got to work on simple things, finding our touches and getting a little more control,” Erickson said. “Figuring out our passes and communication better, that’s a big thing we were missing tonight.”