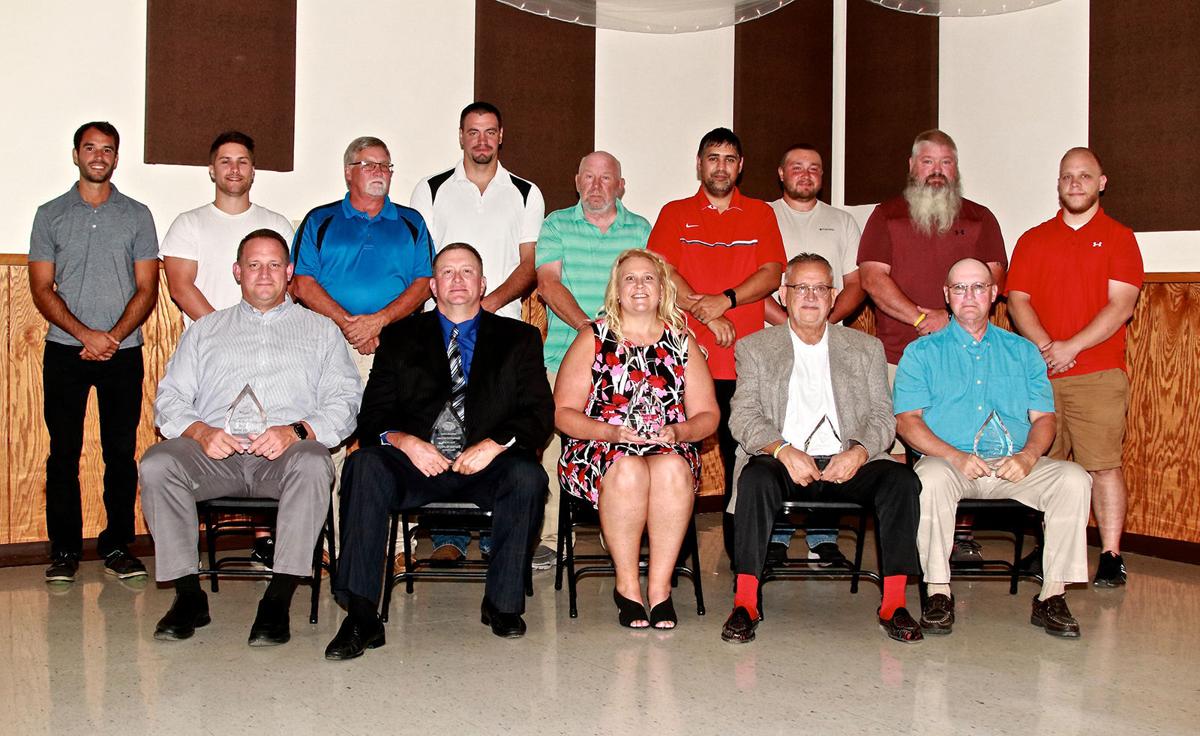 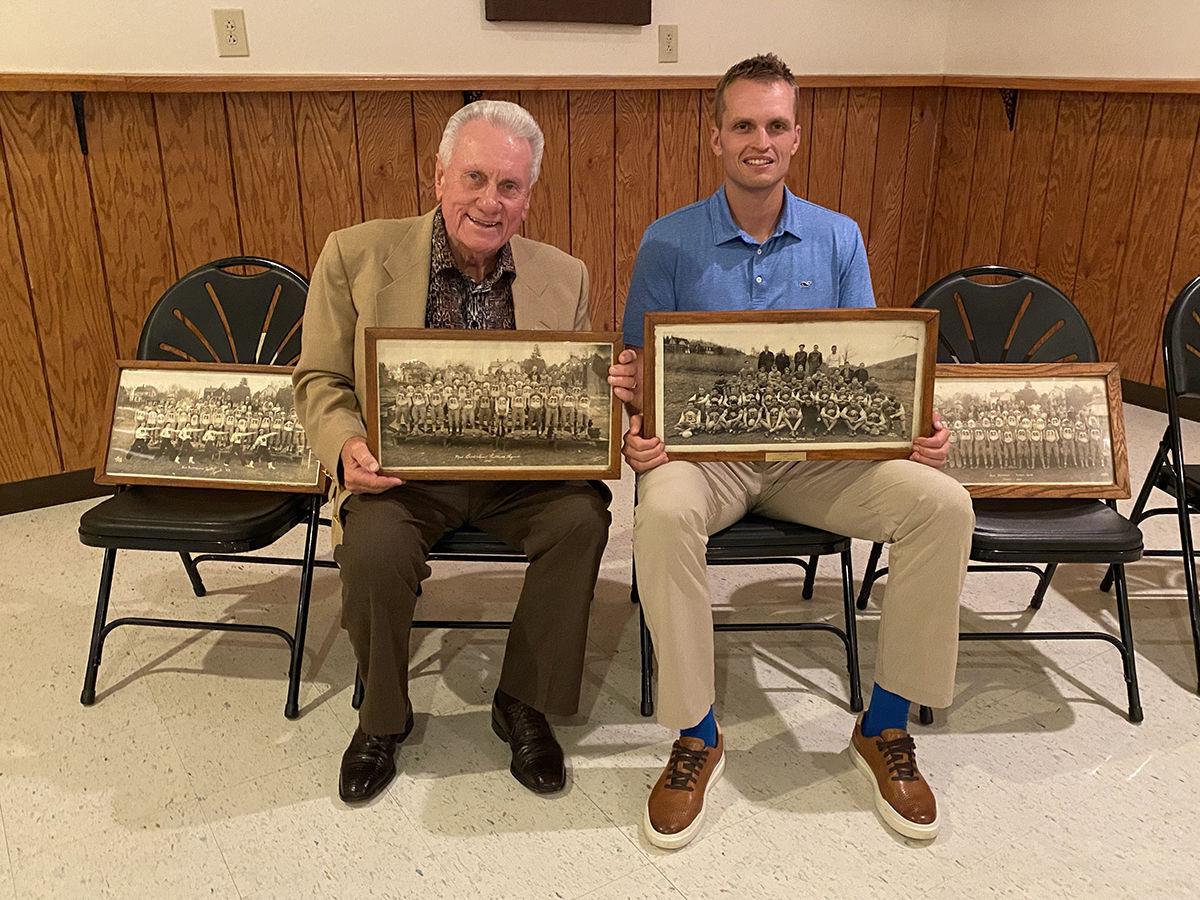 Also at last Saturday’s Redbank Valley Sports Hall of Fame Jim Stepulla (left) presented the Redbank Valley football program and head coach Blane Gold with four framed team pictures of World War II era from what was then called New Bethlehem High School. Stepulla discovered them at an auction and purchased them through the bidding process.

Also at last Saturday’s Redbank Valley Sports Hall of Fame Jim Stepulla (left) presented the Redbank Valley football program and head coach Blane Gold with four framed team pictures of World War II era from what was then called New Bethlehem High School. Stepulla discovered them at an auction and purchased them through the bidding process.

FAIRMOUNT CITY — After a one-year hiatus, the Redbank Valley Sports Hall of Fame was back at it last Saturday night at Trinity Hall, inducting its third group of Hall of Famers.

And of course, there were plenty of reminiscing, praises and thank yous and heart-felt tributes.

The Class of 2021 included Michelle Aikins and Becky Edmonds as the two female inductees, Jason Huffman and Darren Burford the two male inductees, Mike Brown and the late Larry Shumaker as two Coach/Contributor honorees and the 2010 Bulldogs baseball team.

Also prior to the inductions, Jim Stepulla made a special presentation to Bulldogs football head coach Blane Gold of four World War II era New Bethlehem football team pictures. The seasons were played before the modern jointure of Redbank Valley and the pictures were of the Newbie 1939, 1940, 1941 and 1942 teams.

The highlight of the evening, no doubt, were the presentations and speeches of the Hall of Fame members.

— The 2010 Bulldogs baseball team was coached by Justin Merwin and five players and four coaches were on hand to be honored.

Merwin praised his former players for memorable season that saw the Bulldogs finish 18-3 after a D9 title and first-ever state playoff win over Bedford.

“I couldn’t be more proud of them and there was one thing that stood out when we were reminiscing about and it was that they played the game right and fundamental baseball and limited their mistakes,” Merwin said. “They played as a team and nobody stood out and I’d like to congratulate all of them.”

— Aikins was a 1993 Redbank Valley graduate who is a nurse currently at Punxsutawney Hospital while living in Brookville with her children Mikayla and Haley, and boyfriend Matt.

She was the team’s all-time leading scorer when she graduated with 1,211 points currently third) and the all-time leading rebounder with 818. She was part of the 1992-93 league and district title team that was inducted into the 2019 Hall of Fame class. Michelle was also a state placewinner in track and a starter on the volleyball team.

She was introduced by her brother Larry Aikins.

“I want to thank my teammates for being there and we were like a family for four years,” Aikins said. “I’d like to thank my coaches Bob Carmichael, Ben Kundick, Mike Maslar and coach Ernie Black, who brought me up as a freshman and told me together we’d rebuild Redbank Valley basketball and he did.”

She thanked her parents, Larry and Pam, for getting her to all of the practices considering they lived 20 to 25 minutes away from the school.

— Dr. Edmonds is a 1994 Redbank Valley graduate who is a surgical oncologist for the Allegheny Health Network Cancer Institute and lives in Fox Chapel with her husband Alex and sons Will and Johnathan.

Edmonds was unable to attend the banquet, but presenter Angie Shirey was able to read a note from her.

“My story is a little different than most of the other athletes inducted into the Hall of Fame as compared to others,” Shirey read from Edmonds’ letter. “I truly have no any athletic ability, my story as a successful basketball player was one of hard work, dedication, teamwork, and strong mentor. Interestingly, these are the same attributes that I look for retraining young surgeons.”

She praised the late Coach Black as well for his significant hand in her basketball career.

“I can honestly say that Ernie has been one of the most influential figures in my personal development,” Edmonds wrote. “I am forever grateful for his influence and the lessons that he taught me as I train the next generation of surgeons, I’m constantly reminded of the values instilled in me.”

— Burford is a 1985 Redbank Valley graduate who was introduced by Bob Dunkle. He attended the state police academy after graduation and recently retired with a rank of sergeant as station commander at the Emporium barracks. He recently moved back to the area and serving as the school security guard. He resides in Oak Ridge with his wife Tara and children Taryn, McKenzie and Gage.

A three-year starter in football, as a junior he was named Second-Team All-Conference offensive tackle. As a senior, he was named First-Team All-Conference both at offensive and defensive tackle. He was a regional qualifier in wrestling as a junior with a runner-up finish at districts. As a senior, he was a District 9 champion and regional qualifier.

Burford had one of the night’s memorable lines.

“My mom was the understanding one and my dad, if I had a bad game, he’d tell me I sucked,” Burford said. “One night after a bad night at wrestling, I came down the steps and he told me that the next time I wrestle, use my mom’s maiden name.”

Burford fondly recalled his memories playing under football coach Dave Moore, the late and fellow Class of 2021 Shumaker and his other coaches like Kundick.

— Huffman, a 1995 Redbank Valley graduate, was introduced by his eighth-grade son Jaxson. He resides in New Bethlehem with his wife Daniele and four children that include Jaxson, Alivia, Emma and Jace. He graduated from California University of Pa. with a degree in elementary education and he’s a currently a principal for the Butler Area School District along with being on his alma mater’s junior high football and girls’ varsity basketball coaching staffs.

A four-year starter in football, he was the starting quarterback as a freshman on the 1991 team that won Redbank Valley’s first District 9 title. He was also a starter on the 1992 team that won another district title. He was a First-Team All-Conference at quarterback as a freshman and senior, Second-Team All-Conference as punter as a sophomore and First Team as a junior and First-Team All-Conference as kicker as sophomore, junior and senior and was named KSAC Back of the Year his senior season. At graduation, he was also the all-time leading scorer in Bulldogs basketball (currently third) with 1,253 points.

“What I want to focus on tonight is being humble and being not totally about myself,” Huffman said. “The power of positive people is why we’re all hear tonight. The common themes are a strong family, check. Tons of support, check and most importantly you have coaches and people in your life that make you do things that you’re pretty sure that you can never do.”

“I love being around kids,” Huffman continued. “I’m the crazy guy that’s agree to have about 911 11-and-12 year-olds in middle school and I love every day. And at the same time, I try to coach as much as I possibly can coach.”

— The late Shumaker passed away in September of 2017 and was presented by his surviving son Greg with some help from daughter Heidi.

Shumaker was a teacher at Redbank Valley for 35 years, football coach as a defensive coordinator for over 20 years. He was part of the coaching staff for three District 9 titles and four league championships. He Coached track for over 20 years along with helping revive baseball program in the late 1990s.

Shumaker was married to his wife Sandy for 51 years with children Bryan and Corey along with Greg and Heidi.

“On behalf of the family, we’d like to thank the Hall of Fame Committee for his nomination and induction and would like to congratulate all of the inductees,” Greg said.

“Dad took losing personal and would think the opposing coach was more prepared and outworked,” Greg continued. “That was never the reason for the loss. Sometimes, the other team was just better.”

He recalled late nights in the kitchen seeing his dad drawing plays on paper with crumpled up paper all over the floor.

Heidi closed with a poem written by Dave and Nancy Moore in tribute to her father after retiring:

“Roses are red, violets are blue, this is for my buddy, his name is Shu. The seasons have passed and we’ve had some great years. We’ve had lots of laughs and shed a few tears. The players we coached, the camps we’ve been to, the trips we had taken, the games we’ve been through.

“Those are all great memories we’ll never forget. I’m sure we’ll have more. We’re not dead yet. The sidelines you’re leaving just won’t be the same. You’ve been so much help and taught us all about the game. We’ll miss you on the sidelines giving those signals you send. Thanks for being a great coach, but most of all a great friend.”

— Brown currently lives in Clarion with his wife Diana and is the father of daughters Cari, Erin, Moira and seven grandchildren. He’s a 1968 Reynolds graduate who starred in basketball at Pitt-Titusville before coming to Redbank Valley from Schenley High in 1975 and served at the school until 2007 serving as a health and physical education teacher, Driver’s Ed instructor and athletic director for 17 years.

He was introduced by longtime colleague Ed Wasilowski.

“I’m humbled and honored,” Brown said after recalling many great moments of coaching and teaching at Redbank Valley. He also thanked every one involved with the event.

“I want to take the time to thank the entire Redbank Valley community, for all the support they gave me during my time there,” he wrote later.

“As I was done with my Hall of Fame speech there are so many people I didn’t thank and I want to acknowledge them. First, my entire family, my wife Di, daughters Cari, Erin, and Moira. They allowed me to keep pursuing my dreams of coaching.

“Secondly, The PLAYERS who I had the privilege of coaching over my 32 years, at Redbank Valley. Those players gave me everything I ever asked of them, and more. We had some great teams and it was because of their undying ethic to outwork, opponents.

“I will always remember the time we laughed cried and celebrated as a team. Along with those players. I thank all the families that allowed me to work with their athletes. They followed, cheered and did all needed to give them the chance to flourish.

“Lastly, the Coaches I was I was fortunate to have worked with, over my career. I could list all of them, as well as the athletes, but they know who they are. Love all of them and respect them so much. I feel bad I can’t name them individually, but I assure you, I remember and cherish, their friendship.

“I am forever grateful, for the memories.”